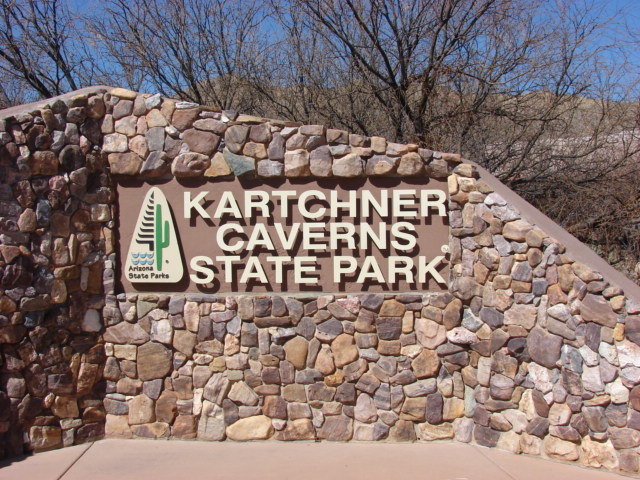 Kartchner Caverns located outside Benson AZ is a State Park and is another jewel found in the desert. Here at Kartchner Caverns, they do not let you take pictures, in fact, the only thing you can take is the clothes you are wearing. They are very concerned about preserving this “living” cave in its most natural habitat without disturbing the balance of nature by the introduction of human fungus which could easily destroy and kill the caverns. So much work has gone into keeping these caves as free as possible of human contact. You enter through two separate tight sealed heavy doors so that air from the outside does not get in and upset the natural humidity of the caves. Special pathways were built in a way that they are rinsed and washed down every night. There are handrails to hold onto and the guides carry little red flags on their belt so that if by chance you bump into the cavern walls or little children touch they can flag it so that cleaners can clean where the cavern was touched.

Much work went into the development of Kartchner Caverns before being open to the public and being wheelchair accessible so that everyone could partake and enjoy the natural beauty of these caverns. Much of the work was done under plastic sheeting to keep dust and other debris from disturbing the natural cave. Much work was done by hand and hauling of rock and materials for the walk.

As I mentioned cameras are not allowed in Kartchner Caverns but obviously, there were times when the park let special photographers into the cave to capture the beauty and history. So the pictures you are seeing here are a selection I picked from the internet so that you could get a glimpse of these incredible caverns. Again the pictures do not do the cave justice in just how awesome, beautiful and mind-boggling they are.

A little history: Two young men Randy Tufts and Gary Tenen stumbled upon this cave in the early ’70s that was untouched and unseen for thousands of years and kept it a secret for 14 years while they explored what they had found. The land that the caverns sit on belonged to the Kartchner family. After the cave discovery and exploring the Kartchner family sold the caves to the State Park and the State Park along with the aide of  Randy and Gary, they set to work on creating access to the caverns for the public.

The formation of the Caverns took thousands of years to develop, but with the combination of limestone, water and carbonic acid three types of “speleothems” were forming. The first is a stalactite which slowly stretches down where water drips off the ceilings, a stalagmite is a buildup of calcite where the water hits the floor and a flowstone is the result of water running down the walls and taking on a crystalline appearance of a waterfall.

The variety of colors that are seen in the caverns depends on the mineral impurities in the calcite. Pure calcite is white, iron creates red, sulfur produces yellow, cooper makes green, and blacks or grays are caused by aluminum salts.

These are the path and walkways that were built for the public.

Forms of Stalactite, Stalagmite, and Flowstone

The tallest column “Kubla Khan” stands 58 feet high in what they call the “Throne Room.” 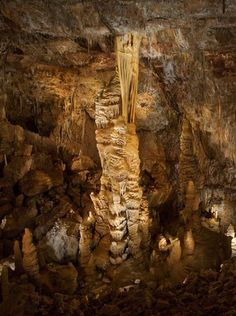 Here are two additional links on the Kartchner Caverns that are really good. Well worth reading