Walnut Canyon is located 10 miles southeast of Flagstaff. It was made a National Monument on November 30, 1915, by President Woodrow Wilson to preserve the ancient cliff dwellings.  In the rock, cliffs are formations of former homes of the Sinagua people. These are the same people who also occupied and lived at Montezuma’s Castle. Sinagua is Spanish for “without water”. Here at Walnut Canyon, their homes were built under the limestone edges within the canyon taking advantage of the natural recesses in the cliff walls. The dwellings were small, but large enough to cook and sleep. There are two different trails that visitors are able to choose from. One is an easy 1/3 mile path along the rim edge. The other is a .9 mile loop trail that descends 185 ft into the canyon via a series of 240 steps. The trail passes alongside the remains of 20 separate dwellings that were constructed by the Sinagua people around 1100-1250. The trail descends down to the canyon floor but is not accessible to the public. Water at one time flowed intermittently through the canyon, but with the construction of Mary Lake and its dam in 1905, water no longer flows through the canyon as it did thousands of years ago. 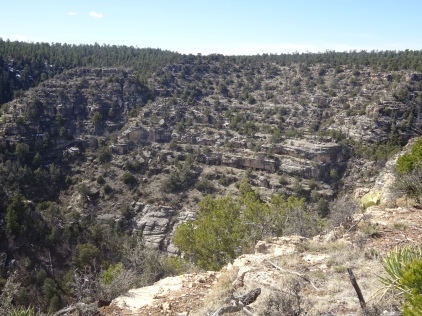