After seeing Kingman and still having a few days left before I needed to be in Las Vegas I decided to go to the South Rim of the Grand Canyon…….A three-hour drive away! I decided I had to take Route 66 which was 130 miles to Williams, AZ (The gateway to the Grand Canyon). From Williams to the Grand Canyon was another 50 miles. I had come this far and learned so much about the famous Route 66 I just had to experience it. Not that two hours is that long but as I was driving across this vast desert land with not much but several little small towns I could just picture how hard and difficult it must have been to travel that highway back in the 1930s when times were so hard, cars were not made to drive the speeds that we can now nor were they very durable to travel such a long way on what was then mostly dirt, muddy roads. Cars would break down, over-heat, tires would wear out or get a flat. People were poor back and did not have the means to easily replace or fix their vehicles. But here I am in the year 2016 traveling on a fairly well-paved highway in a 34 ft motorhome with all the luxuries of home and the power to travel at speeds of 60-65 miles per hour. It makes one stop and think how lucky we are to live in a time where things are so much easier.

So the last time I was at the Grand Canyon I was 14 years old…….42 years ago! What I remember most from that time was how grand and beautiful it was and that we also went to the North Rim where we were able to ride mules partway into the canyon which was really awesome.  I was very excited to be returning to the Grand Canyon after all these years to see the beauty of it all again. Obviously, after 42 years the South Rim Village, visitor center, and so many things had changed, grown and offers many more amenities. Once I entered the Grand Canyon National Park my first choice before even reaching the Visitor Center was the option to take the Desert View Drive to my right which is 22-miles to the Desert View Watchtower. As I took the turn to the right and drove a short distance I came to my first vista viewpoint and there it was…………..The Grand Canyon! Just as the name implies it is so grand, so beautiful, so huge and massive it looks like an artist had a blank canvas and just starting painting the most beautiful picture. I felt like I could just reach out my hand and touch it. The Grand Canyon is a unique combination of geologic colors and forms caused by erosion. The canyon is 277 river miles, up to 18 miles wide, over a mile deep, and attracts about 5 million visitors each year. 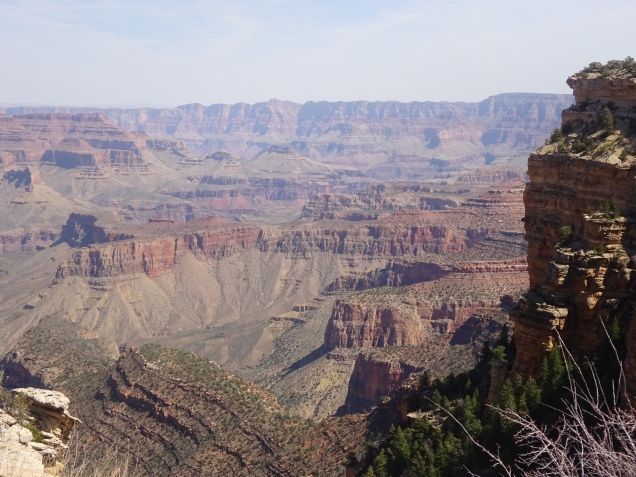 The park has a shuttle bus service…….The blue line, the red line, and the orange line. The orange line travels 8 miles from the Visitor center to Yaki Point (personal vehicles can not travel on Yaki Point Road)…..you can only get to that view point if you are on the shuttle bus, so if you want to go the rest of the route to the Desert View Watchtower you need your own personal vehicle, which is what I did. Traffic along this route was not bad and I was able to easily get in and out of most of the vista viewpoints with my RV. 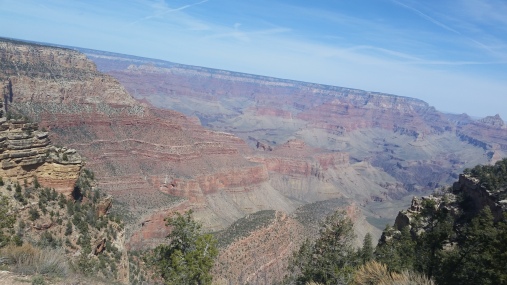 By the time I arrived at the Grand Canyon at midday and did the 22-mile drive to the Watchtower it was getting close to evening time and I still needed to find a place to camp for the night. I checked with the only two RV parks within the Grand Canyon National Park and of course, they were all full, so I left the park and went to the town of Tusayan which is only about 5 miles outside the park where I was able to stay at the RV park there for a reasonable price and had plenty of spaces available.

The next morning I drove my RV to the Visitor Center where I parked for the day and caught the Blue Shuttle line to the Red Shuttle bus. The Red shuttle bus line then takes you along the Rim to Hermits Rest for 8 miles. The only access to this route is the shuttle bus as it is closed to private vehicles from March 1st to November 30th. I thought the shuttle bus would be an easy way to see this route of the Grand Canyon, no driving and having to deal with the RV. Well, it wasn’t long into this venture when I found what a pain it was. Now mind you this was March and I found this mode of traveling to be very crowded and busy due to schools being on Spring Break. There were 8 vista viewpoints along this route that you could get off at and explore, take pictures, etc. Well after about the third stop I decided to stay on the bus and ride it all the way to the end to Hermits rest because I was getting a bit annoyed with the crowded bus that the drivers would shove as many people onto as they could which always included people standing in the isles holding onto the poles and bus railings. In addition, there were times that there were so many people waiting to get on the shuttle bus once it arrived at the vista view that I would have to wait for another bus. Now the buses came about every 10 minutes so it wasn’t a long wait, but it just started getting annoying to me and by then I decided that after seeing the 22 miles of Grand Canyon on the route from the day before and the few stops I made on this route I had seen enough of the Grand Canyon because the 8 miles on this route was beginning to take the whole day. Once I got to Hermits Rest I got some lunch from the little lunch shack they had there and took in one last big view of the Grand Canyon while I ate my lunch before heading back on the Red Shuttle, then the Blue Shuttle to my RV.

At the Visitor Center – Mather Point, I watched a film on the Grand Canyon which was really interesting and well done. Visitors were also able to take a short walk to a section of the canyon here, which was again absolutely beautiful and breathtaking. There was never a bad view of the Canyon at any of my stops. It was all so amazing.

Hermits Rest and the Desert View Watchtower were both designed by the famous architect, Mary Colter who was an employee of the Fred Harvey Company who also created and designed other buildings in the Grand Canyon.

The Desert View Watchtower was built in 1932 and stands 70 ft tall. The tower was designed to resemble an ancient pueblo peoples watchtower. The structure is composed of a circular coursed masonry tower rising from the rubble base. The base is arranged within a large circle with the tower to the north. Tiny windows are placed around the tower. The main entrance floor is the Kiva Room with a roof made of logs that were salvaged from the old Grandview Hotel. On the main floor, there are three large windows with “reflector scopes” – a black mirror that reflects the view of the canyon in a more abstract way, providing an alternative view of the canyon. Between two of the large windows is a fireplace. The tower has a second and third floor which is accessible by a small, narrow stairway. At the top of the second floor is a door to the left which leads out to the balcony where you get a great birds-eye view of the canyon, or you can keep going a few more steps to the second floor enclosed observation level. The tower is decorated by bold murals with petroglyph-style decorations that rise up through the tower to the third floor. To access the third floor there is another set of narrow stairs that goes from the second floor to the third floor. 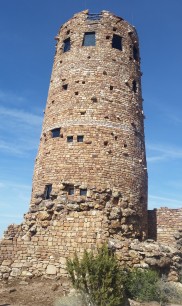 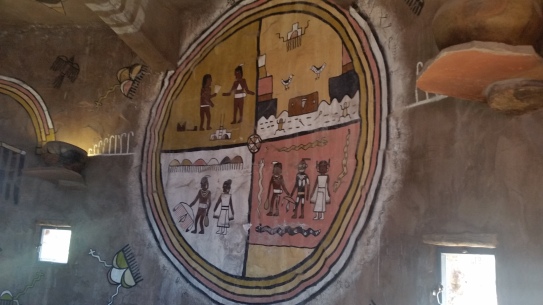 Hermit’s Rest was built in 1914 to look like an old miner’s cabin with a giant fireplace and front porch. The location was named for Louis Boucher-around 1891, Boucher, a Canadian-born prospector staked claims below present-day Hermits Rest. With help, Boucher carved a trail into the canyon and for years lived alone at nearby Dripping Springs. Hermits Rest was built as a rest area for tourists on coaches operated by the Fred Harvey Company on the way to the now-vanished Hermit Camp.