One of the stops Colleen and I made on our trip to Yosemite was a stop off in Oakdale, California to the Cowboy Museum. Oakdale is a city in the San Joaquin Valley. As professional rodeo men and women moved into Oakdale, the interest in rodeos grew. The Saddle Club started putting on rodeos in the spring, and the city became known as the “Cowboy Capital of the World”. The museum is small and free, only asking for a donation. It was well filled with cool cowboy memorabilia and lots of information on the growth of ranching in the area.  There were a lot of great saddles that were won in competition over the years. The staff were really friendly and directed us to a nice spot up the road called Knights Ferry to see some history from the gold era. It’s less than 10 minutes off the highway also on route to Yosemite and worth stopping at. 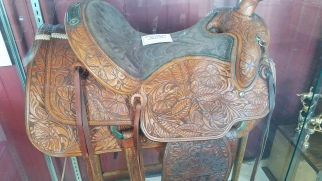